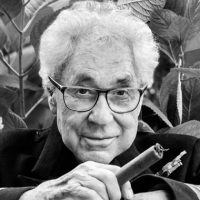 Elliott Erwitt was born in Paris in 1928. His formative years were spent in Milan and at the age of 11 his family emigrated to Los Angeles. While attending Hollywood High School he worked in a commercial darkroom processing “signed” prints for fans of movie stars.

In 1948, Erwitt met Edward Steichen, Robert Capa and Roy Stryker in New York, and they became significant mentors. The following year, he returned to Europe to travel and take photographs, thus marking the start of his professional career. Drafted by the United States Army in 1951, he continued taking photographs for various publications.

In 1964, Erwitt Erwitt was invited to Cuba as a guest of Fidel Castro. During that time, he captured now-famous images of both Castro and Che Guevara. After the restoration of diplomatic relations between the U.S. and Cuba, Erwitt returned to the island in 2015 to document Cuban life now, nearly 50 years after his first visit.

Erwitt joined Magnum Photos as a member in 1953 and his work has been featured in solo exhibitions around the world, including the Museum of Modern Art in New York and Paris, among others. His journalistic essays, illustrations, and advertisements have been featured in publications around the world for over half a century. While actively working for magazine, industrial and advertising clients, Erwitt devotes his spare time toward creating books and exhibitions of his work.