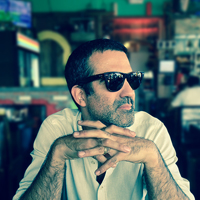 Luis Gispert is a sculptor and photographer whose work often incorporates multimedia, including sound and video. He was raised in a community of Cuban exiles in Miami and has described his aesthetic as “hip-hop baroque.” In 2001, Gispert began documenting Miami’s iconic “chonga” girls in his photographic series entitled, Cheerleaders, which attracted widespread critical acclaim. Most recently, his series Decepcion—portraying widescreen American landscapes through the interiors of “kitted out cars” in “knockoff designer upholstery”—continues Gispert’s examination of ornamental manipulation.

Gispert’s photographs, sculptures and installations have been exhibited worldwide, including the Whitney Biennial at the Whitney Museum of American Art, the Brooklyn Museum of Art, the Palazzo Brocherasio in Turin, Italy, and the Royal Academy in London. Gispert earned his MFA at Yale University and a BFA in Film from the Art Institute of Chicago.