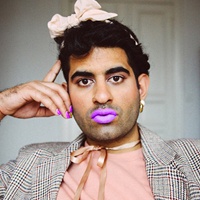 Alok Vaid-Menon is a non-binary transgender femme writer and performance artist. They have been invited to perform, speak and facilitate at universities, conferences and organizations across the world. Their work, which grapples with themes of gender, race, trauma and belonging, has been featured in various media outlets such as Buzzfeed, HBO, MTV, TEDx, The Guardian, The New York Times, The New Yorker and others.