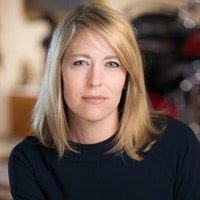 Dr. Amy Scott is the Chief Curator and Marilyn B. and Calvin B. Gross Curator of Visual Arts at the Autry Museum. She has been working as an art historian and a curator since 1993, when she received her B.A. in Art History at the University of Kansas. She received her M.A. as a curatorial assistant at the Nelson-Atkins Museum of Art in Kansas City, continued her curatorial work at the Gerald Peters Gallery in Santa Fe, and in 2000 assumed the role of Curator of Visual Arts at the Autry. In 2013, she earned her Ph.D. in Visual Studies at the University of California Irvine.

Throughout, she has published and contributed to books and catalogues on the art of the American West including Yosemite: Art of an American Icon (2006), Paul Pletka Imagined Wests (2017), La Raza (on Chicano photography) and a forthcoming guide to the Autry’s art collections, Art of the West.