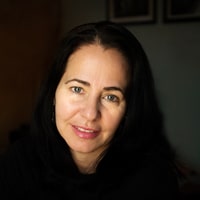 Leysis Quesada Vera was born on April 28, 1973 in Cienfuegos, Cuba. Her family settled in Amarillas, in the province of Matanzas, a place she would later explore in her earliest photographic work.

Originally, Quesada Vera studied English and worked as a professor for three years in a junior high school in Havana. When the Maine Photographic Workshop came to Havana in 1999, she would visit the Fototeca accompanied by her cousin Lazaro Miranda, a well-known photographer, who then helped her land an assistant position with the Maine staff.

It was during this time that Quesada Vera met Jon Golden, a photographer in one of the workshops who gave her a Nikon FM2 camera. It was with this camera that Quesada Vera made her most important first photographs and it was the only camera she used until she began taking digital pictures. By 2001, she had worked alongside photographers David Alan Harvey and Stacey Boge, both of whom she considers important early mentors.

According to Quesada Vera, it was not until January 2000 that she became a “serious” photographer. Inspired by her cousin Lazaro’s work with interiors, she studied the works of master photographers and was particularly drawn to the work of photographers Sebastian Salgado and Sally Mann.

“I have always been drawn to the life of the ‘campesinos’ [people from the countryside] in Cuba,” she says. “Much of my work is inspired by their way of life: how they live inside their own homes and how they go about their daily lives.”

By 2003, Quesada Vera’s work turned inward with the birth of her daughter Avril, whom she now considers to be the most important motivation for her pictures. It is around this time when her work began to center on her own family, friends, and the daily lives of those closest to her in her native Cuba.